Looking for Spanish vegan tapas recipes to try at home? We have all the best vegan dishes, perfect as appetizers, side dishes, or a snack of their own.

If you are vegan and you love Spanish cuisine, you will be thrilled to find out that many classic dishes in Spain cater to your preference.

What’s even more amazing is that, with the use of many well-loved Spanish ingredients such as chickpeas, lentils, and paprika, your recipes are sure to be jam-packed with flavors.

Go on a vegan food trip with our ultimate list of vegan Spanish tapas recipes!

If you are in the mood for something simple to make, Patatas Bravas is a must-try. You can never go wrong with this Spanish fried potatoes recipe. Patatas bravas are only one of the many vegan Spanish tapas recipes that you can recreate at home.

“Brava” in English translates to brave, and you definitely should be kind of brave to eat Patatas Bravas because the red sauce is traditionally spicy. The level of spiciness can be adjusted, though, depending on your preference.

Check out our Patatas Bravas Recipe.

This vegan Spanish tapa is widely celebrated, especially in Andalusia. You have the saltiness of the savory eggplant complementing the sweetness of honey.

If you are thinking of simple tapas recipes to whip up for a small gathering, Berenjenas con Miel is a true crowd-pleaser. As you are preparing, be sure to soak the eggplant in milk for at least an hour so you can get rid of the bitterness in the vegetable.

It’s simple, it’s delicious, and it’s healthy – Garbanzos con Espinacas should be on your list of go-to vegan Spanish tapas recipes to make.

Spinach and chickpeas are a combination that is common in the Middle East. You will also find the same tandem in many Spanish dishes. Garbanzos con Espinacas, in particular, hails from Andalusia.

If available, it is better to use fresh spinach and chickpeas for this recipe. While canned ones are also okay, fresh ones are packed with a flavorful punch you cannot replicate.

Spanish Padron Peppers are one of the vegan Spanish tapas recipes that spicy lovers will truly enjoy.

What are Padron peppers? Padron peppers, pimientos de Padrón in Spanish, are chili peppers originating from Padrón, Spain. They are only about two inches long and are mostly mild – although it is widely known that in many Padron peppers, one or two are super spicy!

It is very simple to make pimientos de Padrón. The peppers are fried, blistered, and then served with a sprinkle of salt. This no-frill tapas can be cooked in a matter of five minutes.

Tortilla Española or Spanish Omelette in English is a classic tapa that is served all over Spain. What makes it different from other omelets is that it is mostly served at room temperature rather than hot.

While this dish is not really vegan because of the eggs, there are many egg substitutes out there that you can use. One of them is chickpea flour with cold water.

Afterward, the sky’s the limit in the ingredients you will put on your Spanish omelet. Some of the classic ones include potatoes (of course,) bell peppers, and onions.

It is quite easy to make an authentic Spanish Gazpacho. This cold soup is one of those vegan Spanish tapas recipes that do not even need cooking!

As you blend your ingredients altogether, you can adjust the soup’s consistency to your liking. Serve it in a bowl or a cup. This dish makes a good summer treat.

Can you serve Gazpacho hot? Of course, you can! A secret shared by fellow Gazpacho lovers is that it tastes even better the next day.

If you have only less than 30 minutes to prepare something special for yourself or a group of visitors, make this simple Champiñones al Ajillo tapas. This Spanish Garlic Mushrooms recipe is among our favorite vegan Spanish tapas recipes to make because it is both an easy and filling dish.

The key ingredient of this vegan dish is, of course, mushrooms. It is best if you use fresh champiñones to get the maximum flavor. Cremini mushrooms are perfect to use for this tapa.

Be generous with the garlic, too! Garlic is packed with proven health benefits when eaten regularly.

Spanish lentil salad brings many of the well-loved flavors of Spain into one plate. You have the classic combination of cumin, garlic, and paprika playing along with other herbs and spices.

Lentils, the main ingredient of this salad, can be found in many Spanish dishes. Spanish Pardina lentils are the most common. They cook really quickly and are rich in protein.

Another star ingredient of this salad is paprika. Smoked Spanish paprika, called pimentón, is derived from peppers smoked and dried over oak fires.

So, you’ve tried hummus a hundred times – but have you tried Spanish hummus?

Chickpeas are used in many vegan Spanish tapas recipes, but nothing quite highlights this ingredient more than a flavorful Spanish hummus. Add in smoked Spanish paprika to the mix, and you have yourself a true classic made even better by Spanish flavors.

What goes well with Spanish hummus? You can serve it with warm pita bread, plain crackers, or as a dip to raw vegetables.

Spanish Ajoblanco, or in English Spanish Chilled White Gazpacho, is a cold white thick soup. It is another summer soup enjoyed by people in Spain, along with the classic gazpacho.

Spanish Ajoblanco ranks among the best vegan Spanish tapas recipes because not only is it easy to make, but it is also a healthy appetizer or snack to consume.

The difference between the ajoblanco and the classic gazpacho is the star ingredient which is almonds. Instead of tomatoes, the dish calls for blanched almonds. 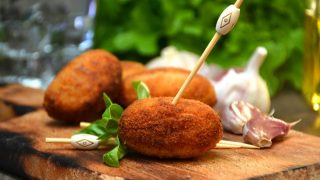 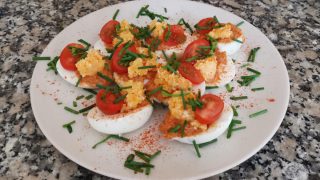