One of the most common Spanish tapas, patatas bravas, are simple-to-make, relatively cheap, and taste like heaven. Best of all, you can easily add any spice or herb to your taste, as most Spanish recipes can be modified completely.

Today, we’ll share our version of the patatas bravas recipe that you’re guaranteed to devour again and again.

Fried potatoes are one of those meals that aren’t tangled by cultural boundaries and national borders. This recipe has its own variation in every cuisine across the world, from the Indian fried potatoes to American hash browns and the Dutch and Belgian frietjes.

This ideal combination of perfectly baked potatoes with a smoky, spicy bravas sauce is enough to awaken your taste buds. Patatas bravas are sold in almost every bar in Spain and are an exotic meal to share among your friends, family, or even colleagues from your workplace.

What is patatas bravas?

Patatas bravas, also known as ‘papas bravas,’ is one of Spain’s signature meals. This meal is so popular that you can find it in almost every bar in Spain. Potato bravas are the desired choice for an appetizer or a tasty snack to share among friends with a round of beers.

It is significantly accepted that there is no better crowd-pleaser than a plate full of delicious papa bravas. Top this papa bravas recipe with some spicy senorita sauce, and make your alcoholic evening a whole lot better.

You can easily tell the overall authenticity of any place by the quality and taste of patatas bravas. It may be effortless to make, but everyone has their own way of preparing this recipe.

Different places may have slight variations in the shape of potatoes and the consistency and flavor of the sauce.

With regards to the history of patatas bravas, it is unknown when precisely this recipe was created. However, we do know that it was sometime after 1543, based on the fact that Europe had no knowledge whatsoever of this tuber until the Spanish conquered the Inca empire.

During the times of war, potatoes weren’t primarily known as edible food. People used potatoes either for decorative reasons during war or to feed their animals instead of consuming them themselves.

Fast forward centuries, it became one of the most basic food products in Spain and for several other European countries too. The origin of patatas bravas took place in Madrid, where it was created and patented.

To make this incredible recipe, potatoes are cut into irregular tiny chunks, fried, and dressed in a hot spicy tomato sauce, which is also poured over them later.

This amazing papas bravas recipe is served in several bars in almost every region of Spain as tapas or “ración.” People love it as it’s delicious and one of the most inexpensive tapas available due to its cheap ingredients. If you ever visit Madrid, ensure devouring this basic but pristine dish—patatas bravas.

Different places, different bars, and different people like to make their own version of papas bravas. We are here with the simplest yet tastiest papas bravas recipe for you to enjoy, using very view ingredients:

For the baked potatoes:

For the patatas bravas sauce:

To make this patatas bravas recipe, you can scroll down and print the recipe card for exact steps and instructions. Let us know how your recipe turned out in the comment section below!

How to make Patatas Bravas?

You can either fry the potatoes with extra virgin olive oil in a pan or bake them in the oven.

Personally, I prefer preparing them in the oven.

First, peel the potatoes and cut them into small, bite-size chunks and soak them for around 15 minutes in hot water.

Afterward, dry them thoroughly, place the potatoes on a baking sheet and drizzle with extra virgin olive oil and fresh, chopped garlic.

Then, put everything for around 25 minutes in the preheated(220°C or 450 degrees F) oven until the potatoes are cooked through and golden brown.

Your Pattas Bravas are not complete without the spicy sauce!

To prepare your sauce you have to mix up chicken broth, extra virgin olive oil, sweet and hot smoked paprika, flour and salt.

The nutritional information provided is approximate and can vary depending on several factors, so is not guaranteed to be accurate. 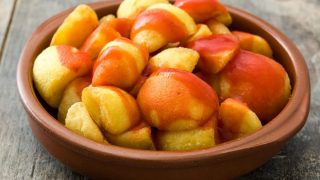