Breakfast is a favorite time for many of us. It is when we commonly eat comforting food that puts us in a positive attitude for the day.

Breakfast is also referred to as the most important meal of the day.

They say that the more packed in nutrients your morning meal is, the more energy you will have to fuel your day.

Do you know what a good way to start your day is?

However, be warned… It does not necessarily follow the “the more, the merrier” kind of meal in the morning. On the contrary, it is simple, straightforward, and, a lot of times, sweet!

What do Spanish people eat for breakfast, anyway?

What part of it breaks the typical breakfast variety?

Spanish breakfast foods may appear small in portion and not filling at all, and we can’t blame you for thinking so.

However, wait until you hear about “second breakfast,” a heavy meal that comes between Spain’s breakfast and lunch.

While people may try calling it brunch, we are not sure if it can be called so.

Keep in mind that Spanish lunch is typically served between two and three PM – a time wherein others around the world are already having afternoon snacks.

If you are visiting Spain, treat yourself to a traditional Spanish breakfast.

Not only is it loaded with essential energy-giving nutrients to last you at least until the next meal, but it is also teeming with all the bold flavors the country is well-known for.

If you are keen to try some of them at the comfort of your home, make sure to check out the Spanish breakfast food recipes at the end of the article!

In some regions of Spain, there will be a special tostada being whipped up each morning.

In Catalonia and Murcia, they go for the simple pan con tomate. In Andalusia, they have what they call tostada con Manteca – toast served with red-colored lard.

As in many breakfast menus, eggs are indispensable. In Spain, tortilla española is one of their go-to dish in the morning.

A traditional Spanish omelet will have only a few ingredients: egg, potato, and salt. That is why it is also called pincho de tortilla, tortilla de patata, or potato omelet.

The doneness of your Spanish omelet will depend solely on your preference.

Spanish omelet is enjoyed by many as their second breakfast. While others will pair it with a caféc on Leche, some choose to eat it with a caña, a small draft beer.

Torrijas are among the Spanish breakfast foods recipes that are easy to make.

In fact, I recently followed this delicious & easy Spanish torrijas recipe, and it did not disappoint!

At first glance, you will say that torrijas are very similar to bread pudding or French toast.

However, as you will see in my recipe, torrijas are actually fried in olive oil.

A typical Spanish breakfast is not complete without a café con Leche. This drink is basically coffee and milk.

To make café con Leche, a shot of espresso is dosed with steamed milk. This hot beverage is similar to America’s cafe latte.

Another typical Spanish breakfast food is a churro. Some of you might book a one-way ticket to Spain upon learning this – churros for breakfast?!

There is even more: it is commonly served with Spanish hot chocolate.

The pastry is piped using a star-shaped tip, freshly fried, and dusted with cinnamon and sugar. The hot chocolate on the side is made for dipping.

Magdalenas are Spanish lemon cupcakes that are best enjoyed with a cup of café con Leche.

This type of cupcake is rich and tangy in taste yet light and fluffy in texture. It is quite similar to the French’s madeleines.

Magdalenas are not only eaten during breakfast. It is also enjoyed as a light snack during the day. You can easily find these baked treats in grocery stores in Spain.

Sandwiches (in Spanish: Bocadillos) are another traditional Spanish breakfast item.

Some of the different regions in Spain have specific bread that they like to use for their sandwiches.

The most-used type of bread all over the country, though, is the classic baguette which people call barra.

You will be delighted with all the fresh juice options you can get in Spain!

Most (if not all) cafeterias and restaurants have juicers to squeeze all the liquid goodness out of the fruits in season.

Unlike the ones that come in tetra paks and some notorious for having multiple shots of sugar syrup, Spain likes to keep their juices pure.

Be sure to order one to come with your traditional Spanish breakfast!

Tempted with all the Spanish breakfast foods I just listed above? Why not make some at your home right now?

You don’t have to be in one of Spain’s restaurants to have a taste of their beloved breakfast items. Most of the dishes the locals enjoy in the morning call for very few items from your pantry.

Also – if I may add – this is a nice and valid reason to have chocolate and other sweet items for breakfast!

Spice up your morning table by cooking up a Spanish menu for breakfast.

These Spanish breakfast recipes are all easy to make and delicious to eat! 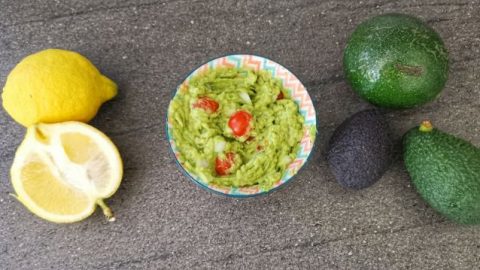 Start your day with a delicious and easy to prepare Guacamole.