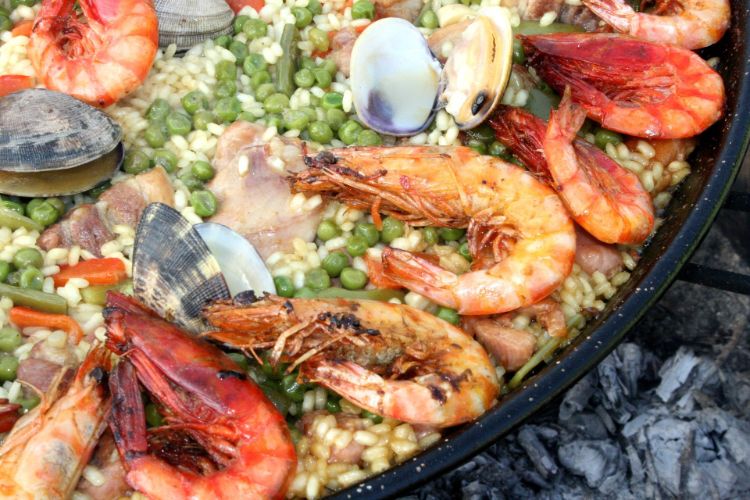 What is paella and what makes it one of the most celebrated foods from Spain?

There is something so appealing when you see this full pan of golden yellow rice topped with all sorts of meat and vegetables.

What makes it even more special to your eyes is the way it is served – on the pan where it was cooked, in the middle of everyone whose gazes are directed towards the lone star of the dining table.

It is safe to say that there is no other food that screams Spanish so much than a pan of paella. What is paella, really?

Paella is a dish made up of short-grain rice cooked with seafood and your choice of meat.

What is paella without its crispy bottom?

Surely nothing near the traditional!

The famous paella crust is called the paella socarrat.  It comes from the verb “socarrar” which means “to toast lightly.” This is achieved by not stirring the pan as you cook the dish.

Where is Paella from?

Paella is popularly from Spain, although a lot will say that its historic origin is practically untraceable.

Experts of Spanish cuisine attribute the creation of what we know as paella today to the city of Valencia in Spain.

They say when you eat paella that comes from Valencia, it is the most authentic paella that you can ever taste.

Paella Valenciana traditionally has round grain rice, beans, meat (which can be rabbit, duck or chicken), snails and artichoke.

Seafood paella or Paella de Marisco can include:

Meat paella can have:

Mixed paella or Paella Mixta can have a variety of meats from both classifications. A vegetarian version or Paella Vegetariana is also entirely possible.

After distinguishing which type of meat goes into your paella, both will have similar ingredients from this point on.

The vegetables that are usually included are onions, tomatoes, and peppers.

What is paella best known for when it comes to appearance? It has to be its golden color. You achieve this by adding saffron threads to your dish.

The stock that cooks your rice is something you should give importance to. After all, this will be the base flavor of your rice dish. You can achieve a good broth by simmering parts of fish or chicken for a good amount of time.

The rice used in Paella is short grain rice. In Spain, there are specific varieties which they typically use to make different kinds of paella.

How to make Paella?

What is paella and its goodness for if you cannot eat it every time you crave for it?

When you cannot possibly go to your favorite Spanish restaurant to have a pan of authentic paella or when you have a party of people to impress with your cooking skills, knowing how to make a good paella comes handy.

Here are the essentials in cooking Spanish paella:

The paellera is made especially for paella. It is round and has a flat bottom, with some having small dents all around.

The paella pan can come in different diameters, but it will always only be thumb deep.

If you do not have a paella pan, can you still cook paella at home? Yes, you can.

If you have a shallow yet wide skillet at home, it can be used to cook paella. You might just not be able to achieve the same cooking that a paella pan gives.

The Rice used in Paella

Do not make the mistake of using only the rice that is available in your pantry.

Exert some effort in getting the best short-grain round rice available near you. This makes the dish as close to the traditional as possible.

The Method of Cooking Paella

You have three cooking options when making a paella.

First, you can choose to cook on your stove burner. Just make sure you can temper the heat efficiently. The stove method is by far the best way to make paella because you can adjust the heat accordingly.

Second, you can choose to use wood for fire. This is the traditional way of cooking paella. However, it takes skill to master the lowering and increasing of heat when using wood.

Third, you can use the oven. This is ultimately nontraditional but it works for some.

In the last two minutes of your cooking time, turn the hob to a high level and wait until you hear the sound of your rice cracking. There will also be a smell of toast – but not burnt.

Check the socarrat with a fork. If you get a good crispy layer out, you have achieved arguably the best part of your paella.

What is paella to the Spanish citizens? More than it being a staple food, it is also a great emblem that signifies the value of sharing.

Allow the dish to rest before you bring it to the dining table. Afterwards, serve the paella directly from the pan.

See your whole dining guests circle around the dish, scooping a hefty serving of your masterpiece and placing them on their plates.

Taking Care of Your Paella Pan

It is essential to clean your paella pan thoroughly after every use. When it is dry, rub some olive oil on it so that it will not get rusty. This method is called “seasoning the pan.”

Frequently Asked Questions About What is Paella

Was this post helpful? If so, be sure to pin it to refer to later!